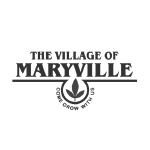 I would like to thank the following people who provided me with details about the history of Maryville. Without their help, this project would not have been possible: Emma Govenat, Norman and Pam Picchioldi, Bethel Sliva, Marianne Mezzano, Mike Semaninism, Bill Schiber, Pastor Callahan, Bob Paskero, Beulah Klenke, Mary Bibko, Rink Lucas, Margaret Pemberton, and Theresa Schwartz.

900 to 1500 A.D.
The Mississippian culture thrived during this time period. The center of this Indian (Native American) culture is located at the Cahokia mounds complex. Smaller, satellite communities with mounds and ceremonial centers were also located at Lebanon, Dupo, St. Louis, and Mitchell. These Native Americans were the first to rely primarily on horticulture, although hunting for game and eating wild plants were still important to their diet. For reasons still being debated, this culture disappeared over a short couple of decades before the end of the 16th century. Prior hypotheses for their disappearance were death by disease and warfare. The current hypothesis is that there was an extensive drought followed by massive famine.

1900 to 1993
Learn about the industrialization of Maryville from 1900 to 1993 and read highlights from previous mayors' eras.